I am professor of economics at Link Campus University of Rome. I also collaborate with the Leeds University

Go to my institutional page

My main areas of expertise are theory of value, monetary economics and macroeconomic modelling

I am teaching political economy and international economics

Sometimes I participate in public debates and radio & TV programmes

I am a professor of economics at Link Campus University of Rome. I coordinate and lead the EU-funded project A JUst Transition to the Circular Economy (JUST2CE) at University of Leeds. I am also a member of the “Collegio dei Docenti” of the PhD Programme in Social Sciences at University of Padua. 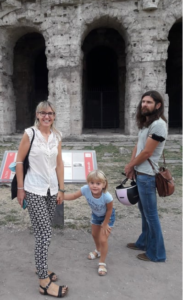 I am mainly interested in macroeconomics, economic modelling, monetary economics, and theory of value and distribution (here is my CV).

I am married to Marica Grego, who has a post-doc contract at University of Pavia, and I have a daughter, Alice. I am a member of, among others, the editorial staff of Economia e Politica, Reteaching Economics, the Italian Post-Keynesian Network and the Post-Keynesian Economics Society.

The lens through which I view the world

What would have you done if you were not an economist?

Well, I used to have three idols when I was a teenager: Che Guevara, Maradona and Jim Morrison. I do not know why, but I have got the feeling that something went wrong. (Read the interview here [Italian only])