After Italy, it is the turn of France to ‘reform’ the labour market.

Figures A to C show the story we are usually told in that regard: the higher labour flexibility, the higher the employment level (because, given the labour demand curve LD, the labour supply curve LS shifts rightwards in Figure C). Given labour productivity (coefficient a in Figure B), this entails a higher supply of goods (x in Figure A) and hence a higher real GDP, along with a lower price level (p). In formal terms, the aggregate supply curve (AS) shifts rightwards. 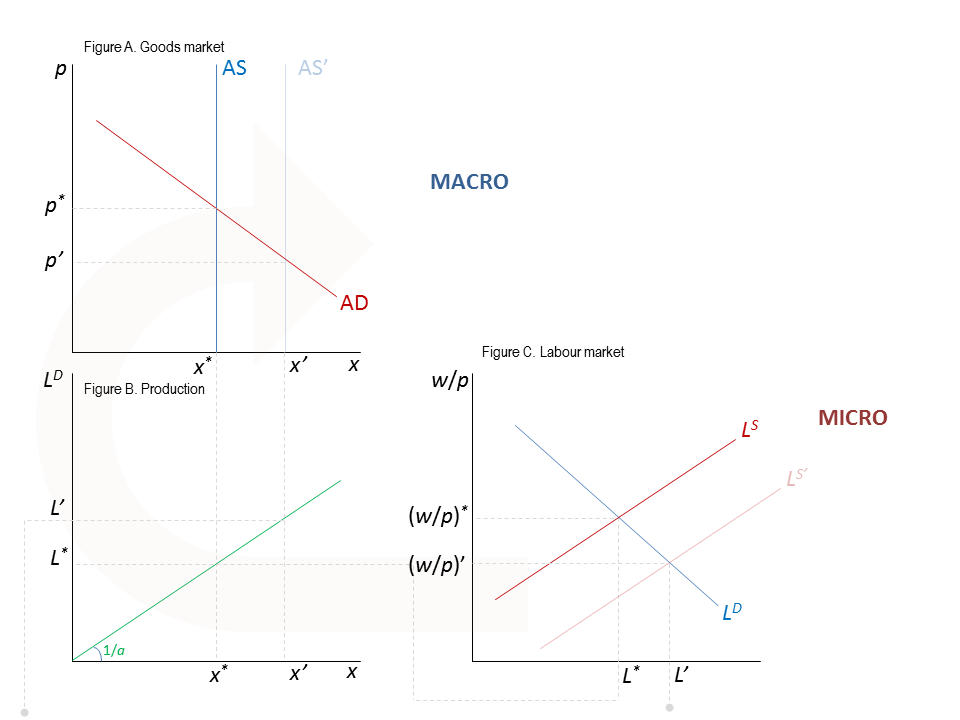 Notice that, in the scheme above, the causality runs from the micro level (labour market) to the macro level (final goods market).

Trade unions may well guarantee a higher real wage rate (w/p) for workers who are employed yet. However, the society-wide effect of collective negotiations and labour protection is negative: a higher unemployment rate coupled with higher prices and a lower supply of goods.

That is the reason why we need labour market reforms to increase flexibility, thereby enhancing the employment rate, don’t we?

No, we don’t. Just an example. When you signed the contract with your employer (I assume you are lucky enough to have one) you did not bargain the bundle of goods and services you could buy with your salary, do you? And I guess your employer did not work out her own employment needs by estimating the ‘wage in kind’ of the employees.

The fact is that neither your real wage nor the number of colleagues of yours are determined on the labour market. Firms’ demand for labour inputs is determined by the final demand for their own goods (Figure D below), while the real level of wages depends on prices autonomously set by the firms (given the nominal wage rate bargained by individual workers and trade unions with the firms). 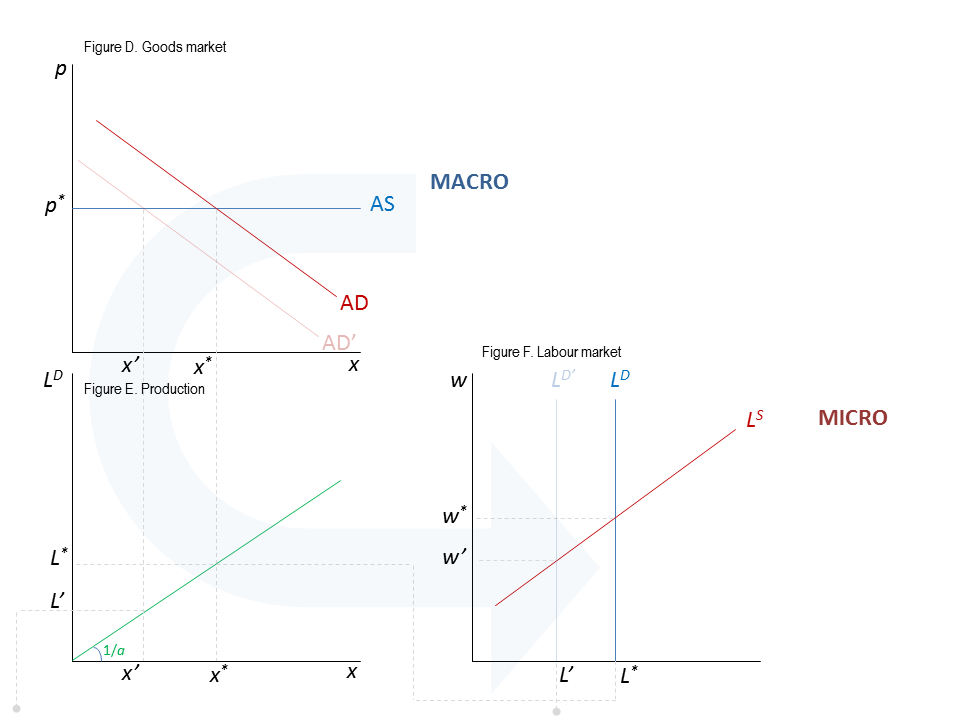 The causality runs from the macro level to the micro level in the real world. In other words, it is the effective demand for goods that determines the demand for labour inputs (given both labour productivity and labour supply).

What is the effect of labour market reforms then? Well, a higher workforce causalisation is very likely to reduce the domestic component of aggregate demand (that is, the AD curve shifts leftwards in Figure D, particularly when investment plans are sensitive to the rate of utilisation of plants), thereby reducing both the employment level and the nominal wage rate (from Figure D to Figure F, via Figure E). That is exactly the opposite of what governments should be doing, particularly during a recession.

Unless… unless the actual target is not the employment (or unemployment) level, but something else. For instance, the will to improve the trade balance. I am going to discuss this point later on. In the meantime, French ‘casseurs’ may well provide some sound arguments to persuade their compatriots not to buy German cars. That is why they are right anyway.