Financialisation and the monetary circuit

The article that Malcolm Sawyer and I wrote for the Metroeconomica‘s special issue on Augusto Graziani‘s economic thought is now available online. It is a spinoff of the FESSUD project. We pay tribute to one of the greatest Italian economists of the Twentieth century and one of the most influential monetary theorists worldwide. We explore how the Theory of Monetary Circuit can be developed to reflect some important features of the evolution of the financial system in the past three decades, which have been associated with what may be termed financialisation. For this purpose, we embed the benchmark single-period monetary circuit scheme proposed by Augusto Graziani in a richer set of institutional arrangements. More precisely, the theoretical contrast between clearing banks (whose liabilities are treated as generally accepted means of payment) and other financial institutions (which can provide a wide range of financial services, but cannot create monetary means) is highlighted. The former provide firms with the ‘initial finance’ they need to get the production process started, whereas the latter concern with the so-called ‘final finance’. 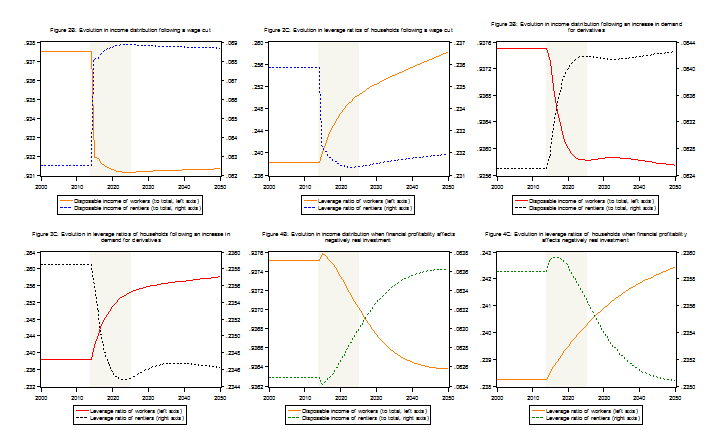 In addition, the stock-flow consistent modelling technique developed by Wynne Godley and Marc Lavoie is used to support our narrative. Our preliminary simulation findings (see above charts for a hint) are consistent with the common belief that financialisation of early-industrialised economies was associated with a worsening in income distribution and an increase in the indebtedness level of the working class. The presence of financial intermediaries, transforming household loans into financial products, and the effect of class divide on access to bank credit, are pinpointed as the two main drivers of the above dynamics.