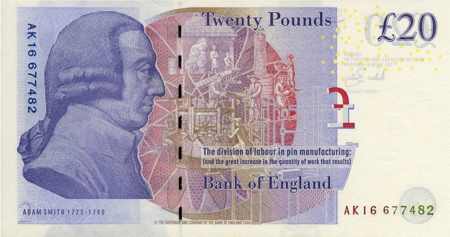 So tomorrow I will be introducing Adam Smith to my students. Interestingly enough, Smith is usually regarded as the founding father of laissez faire in economy policy. No doubt, he was a liberal thinker. His ‘invisible hand’ parable is the most known metaphor in social sciences. Yet, it is seldom recalled that Smith devoted just a few words to that metaphor. Smith used it only twice in his works. By contrast, he provided the ground for the labour-theory of value (whose corollary is that economic surplus results from exploitation of workers in the production sphere) that was later developed by David Ricardo and Karl Marx. In addition, while pointing out that the division of labour and hence labour productivity are limited by the extent of the market, Smith raised an implicit criticism of supply-side economics and (most of) its policy implication. In fact, we have here an anticipation of the Kaldor-Verdoorn law (labelled the ‘Smith effect’ by Paolo Sylos-Labini). Of course, Smith was not a socialist. But he was not even an ante litteram neoliberal thinker. I reckon that, if he only could observe recent crises of the main capitalist economies, he would have probably shared Joseph Stiglitz’s joke that the invisible hand often seems invisible because… it is often not there.